She has Fibromyalgia and Long Covid Symptoms 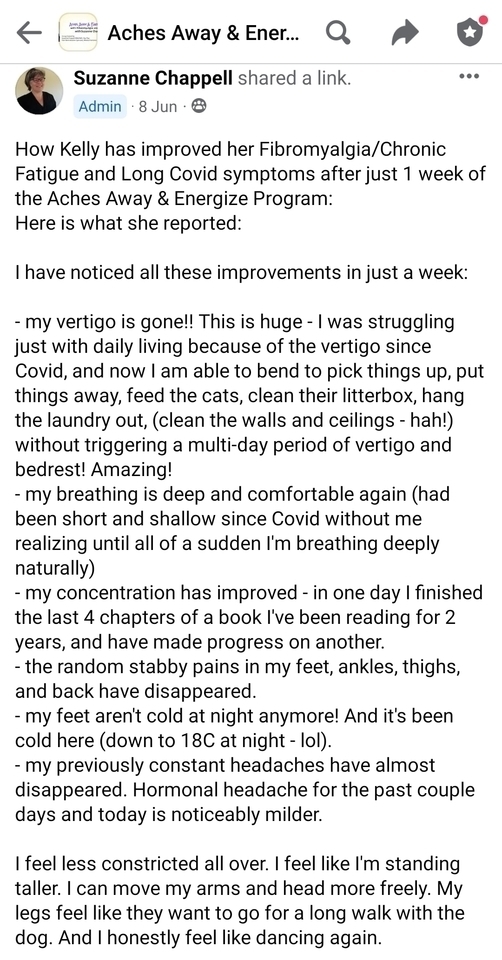 Fibromyalgia and Fatigue Symptoms   This lady agreed I could share her words but not her name. 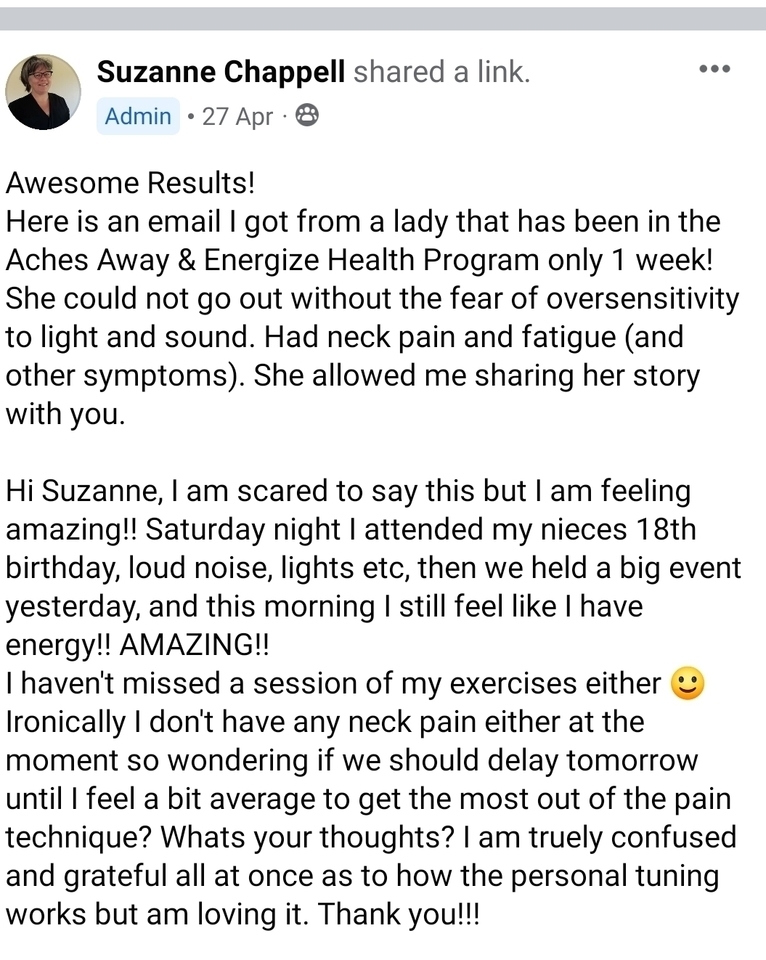 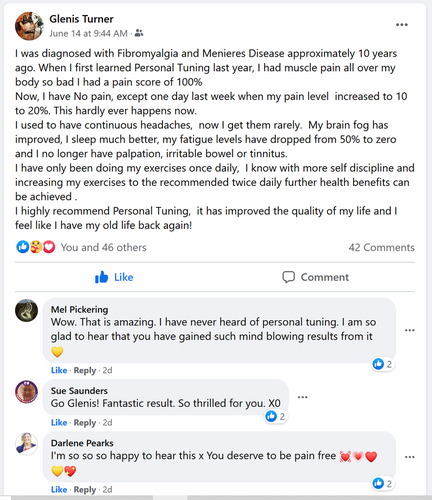 Ma3cy0 ltS9o, i2510u21r  ·
I have been doing this for 4 weeks. I am now able to fall asleep which I couldn't do that before. I am able to use the exercises to help calm my brain to handle my stressful life. My vision, memory and concentration has improved in this hort time. I am stoked with my immediate progress.
1 Comment
Like
Comment
Share

I have been doing Personal Tuning for only about 4 months now and have missed only a few sessions.

My Migraines were twice a week and now I only get them about once a month.  I still have some stress in my life which I think triggers them.

My muscle pain, hip and lower back pain, foot numbness, dry eyes, concentration problems, light sensitivity, sleeping problems, abdominal pain, and sinus problems have all improved a lot and are now only minimal.

Suzanne, many thanks for all your help, it's quite an amazing technique and I'm really pleased it's a journey I embarked on.

Michelle had been doing Personal Tuning for only 4 months at the time of writing the testimonial below.
Suzanne keeps me walking -


I've had (PSA) Psoratic Arthritis since I was a teenager, with pain predominately in my lower back and later in my knees.  I saw specialists, tried all sorts of things, but nothing helped and the drugs often made me feel a lot worse.

I pushed through and stayed active with sports but about 9 years ago my right knee got so bad I could hardly walk on it and the pain at night was dreadful. The Orthopedic Specialist recommend a knee replacement but I felt I was too young (46).

I had Pain Neutralization treatment with Suzanne at Aches Away in Whangarei which helped keep the pain at bay for a week or two at a time.  Then Suzanne discovered a self help breathing technique that helps chronic pain.  She taught me how to do this so I could do it at home.  If I do this twice a day it keeps the inflammation of the arthritis down, no more aching at night and my knees feel so much better.  I was at a point where when I stood up from sitting it took my knees ages to get going so I could walk.  Now this is not a problem.  I recommend anyone with (PSA) Psoratic Arthritis to give this a go, it's worked wonders for me.

PERSONAL TUNING
I have had fibromyalgia for approximately 14 years now. I am on medication, which includes pain
relief and some days, stronger pain killers. Since learning the personal tuning exercises and
practicing them twice a day I feel I have the pain under control. I rarely need to take stronger pain
killers.
For me, this condition has meant some days of debilitating full body pain, which is exhausting, also
permanent pain in the soles of my feet. I have tried various exercises, treatments, diets and natural
medicines over the years with no results.
I no longer suffer pain in my feet, I have fewer headaches, no heavy pressure on the top of my head
and days of excessive pain are minimal. I also no longer experience dry eyes and mouth. I am able
to live normal daily life more comfortably. I feel that practicing these exercises has been very
beneficial to myself.
Glenys, Whangarei

Suzanne here, I am the Coach of the Aches Away & Energize Health Program.

This used to be called Personal Tuning where we did just step 1 of the program.

I had Migraines with aura, Meniere's Disease, and the symptoms of Fibromyalgia for many years like Oversensitivity to Light, Sound and Skin Oversensitivity, Fatigue, IBS, pain in different places, pressure on top of my head, pain in the roots of my scalp hair, dizziness, (it would go into vertigo too), brain fog, difficulty concentrating and poor memory, overall tightness in my body, dry eyes, palpitations, too hot or too cold.

I do what I teach in the Aches Away & Energize Health Program.

I no longer suffer those symptoms and can live a normal life again.

One year ago I had open heart surgery, following which I was plagued with migraines once, often twice a day.  I was usually able to head off the full attack if I could take two Panadol immediately the visual impairment began, and lie down with my eyes closed for whatever period of time it took.  Needless to say, this was often inconvenient as I live on a rural property in Australia, & sometimes they would strike when I was driving the 1.5 hours to town, or in a social situation etc.
I had rarely had migraines;  perhaps once every few years following extreme stress (which I suppose would describe the valve replacement fairly!) & it was definitely related to the surgery.  I also experienced violent cramps in my back ribs, which would completely take my breath away with their severity. None of the doctors or nurses during my numerous hospital re-admissions had any idea what this was, though a cardiac nurse practitioner later told me it was severed nerves looking to rejoin and would eventually disappear,
In early December, when both Suzanne and I were attending a seminar in Bathurst, she became aware of the migraine problem and told me about Personal Tuning, which I started soon after.  The effects have been astonishing;  I have had only one migraine since then, and it did not develop past the visual disturbance,even though I did not take Panadol and was able to rest only briefly.
I must confess that the recurrence happened when I thought I was in total control of the problem and had reduced my Personal Tuning exercises to first thing in the mornings, instead of also at night before bed.
Although I didn't associate the connection at the time, I realise as I write this, that the cessation of the cramps that struck different parts of my back, coincided with doing these exercises also!
As I have completed this short protocol every day for four months, migraine and cramp free, and was sleeping so much better than I had been for a year, a few weeks ago, I allowed myself to drop the evening ones again.  However, gradually other pains that I had completely forgotten, and which had caused serious sleep deprivation for so long, began to return. I simply hadn't realised that the protocols had impacted those pains as well.
So of course, I tailored my evening activities to allow me to resume the evening exercises as well, et voila!  I'm now back to sleeping well, and feeling so very much better - more energetic and with negligible pain.
I would unreservedly recommend that anyone suffering these debilitating conditions contact Suzanne to start Personal Tuning as soon as possible.  I am truly astonished and so grateful for the difference it has made to me.
Jo Macdonald, Australia

Doing the personal tuning exercises eliminated my back pain and headaches (after just two days), reduced light and sound sensitivity, joint pain and the big one for me - period pain. I've tried everything under the sun for period pain and nothing has worked like this. It honestly feels like a miracle.
I learned these exercises during Covid lockdown and it felt really empowering to be able to do something for my body instead of relying on bodywork and having to go see a practitioner, which at that time I couldn’t do.
If you're remotely curious, go check it out - it really does what it says on the tin!!

Abdominal pain, back pain and anxiety

I had a teenage client that was presenting with these symptoms and after doing Personal Tuning twice a day, she had no abdominal pain, back pain or anxiety.  She was a different person.  When she missed her breathing practice a few days in a row some of the pain came back in her back.  Going back to twice a day she was much better again.  I saw her mother about 6 months later and her daughter is fine, she no longer needs to do the technique but has the knowledge available to her if she has a relapse.